Characteristics of Artistic Fabric defines the various contributions of fashion and technique of a technician.  Handloom doesn’t need many raw materials. But its elegant texture makes it arguably the best fabric in this industry. Cotton yarn, silk yarns are used as major raw materials. 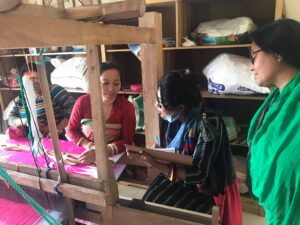 The characteristics of artistic fiber sometimes depend on chemicals and dye’s properties. Sometimes chemicals and dyes are also required for making the yarns a bit more colorful and vibrant. But there are other variations in these materials, which makes handloom, much richer than any other cloth. 3.2.1 Cotton: the mother material Cotton is vastly known as ‘cellulosic fiber’. It is often said that the whole world’s textile market depends on cotton. Cotton is the sole world’s most important natural fiber. In 2007, the global yield was 25 million tons from 35 million hectares. As handloom doesn’t require electricity to weave cloth, the yarn and fabric end up being less stressed and less damaged. Besides, handwoven cotton is well known for its breathability compared to mill produced cotton. Cotton yarn is usually dyed in hank form. 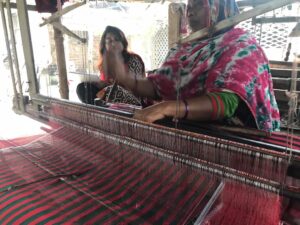 Yarn coloring or dyeing is a critical pre-loom procedure. For the last 50 years, dyeing handloom with chemicals has been used vastly in the textile industry. Colorant or dye is like that one method which keeps handloom in our first fabric priority.

Silk is called the queen of fabric. There’s no other fabric that holds more royalty than Silk. Characteristics of artistic fabric become more sophisticated with this fabric. This is a natural protein fiber, which is the queen material of handloom. This natural protein fiber is composed mainly of fibroin. It is obtained from the cocoons made by certain insect larvae. Silk has a separate fan-base around the world because of its exquisite and sophisticated appearance. Since silk has high resistance for deformation and its low density makes it light and comfortable, it is extremely popular among both weavers and consumers. This strongest natural fiber has the shiniest texture in fiber history, and it has a good affinity to dye as well. From the early 13th century, Silk was becoming very handy cloth in this region. During that time it was known as Bengal silk or Ganges silk. In 1952, The Pakistan government started silk production in Rajshahi.

Though in 1978 Rajshahi’s silk factory was handed over to the Bangladesh Sericulture Development Board, it couldn’t meet its demand. Due to a massive fall down in the industry, this factory closed in 2002. But before everything fell apart, more than 300 tons of strings were produced in this factory. Later In 2011, it could only make around 50 tons annually. Because of this incident, there’s still a missing piece in this handloom industry

Fashion researcher At Zhejiang sci-tech university. Doing research on Socio-Economic Condition of Hand Loom and Ancient Textile People. Doing a part-time job as a lecturer at Uttara University.
View all posts
Previous: The origin of Jamdani